No Kringle yet, go and get some!

What is a Kringle?

Racine Danish Kringles are not your ordinary pastry! 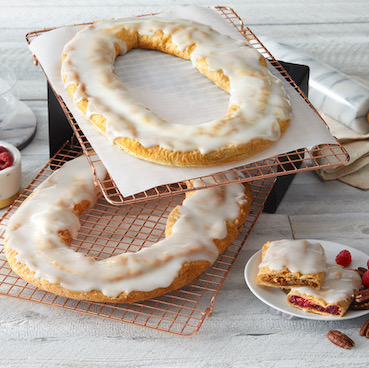 What is a Kringle?

A Kringle is a Northern European pastry. It's a variety of pretzel, but Kringle as we know it today is a sweet pastry made of layers of flaky, buttery dough, with a filling and toppings in a wide variety of flavors.

Why is Kringle so popular in Wisconsin?

The simple answer is that there is a ton of Danish heritage in Wisconsin. Racine, Wisconsin became a Danish hub where many families made a living in bakeries. While Kringle traces back to the 13th century in Denmark, the Danish-American Kringle we know now was born in America.

What is the difference between a Danish and a Kringle?

A Kringle is a “Danish". “Danish pastry” or a “Danish” is an umbrella term for various types of buttery, flaky pastry. A Kringle is a pastry made with layers of sweet, flaky pastry, filled with fruit, nut or gourmet filling and topped with sweet icing. Originally, the Kringle was in a twisted shape like pretzels. Overtime, bakers adjusted to the classic oval ring we know today. Read more about our Kringle and how they’re made!

Kringle became the "Official Wisconsin Pastry" in 2013, but it has been around much longer than that. Kringle was originally brought to Racine in the late 1800's by Danish immigrants. This unique pastry quickly became popular in southeastern Wisconsin and while almond is the original time-honored filling, there are so many other flavors you can enjoy.

Kringle tends to be eaten quickly when shared with friends, family, or coworkers. For those who just want a slice now and some for later, the pastry is shelf stable for 5-7 days. You can freeze some, grab a slice, and freeze the rest! If you want to keep your Kringle as fresh as possible, put it in the freezer rather than the refrigerator. Enjoy!

Ready to Try Some for Yourself?

We ship direct to your doorstop so order today for yourself, friends, relatives, or co-workers. There's sure to be a flavor you'll love.